Tesla Motors is on a roll. And many more could roll into your shop.

Chevy Corvette. Cadillac Fleetwood. Pontiac GTO. General Motors has produced as many—if not more—classic American cars as any manufacturer in the nation. And while GM continues to manufacture more than 10 million cars a year, there is a new player in the game when it comes to overall company value.

Who is the automotive giant that just passed this American icon? A new foreign player from Asia? Maybe Hyundai or Kia? Or did Ford surge so much last year that they climbed higher than their century-old American rival? No, no and no.

It was a company that delivered 9,920,000 fewer vehicles than GM in 2016—Tesla Motors. That’s right, a car manufacturer that was started in 2003 was just valued at more than a company that opened its doors in 1908. In early April of 2017, Tesla’s market value climbed to $50.9 billion. That’s more than GM and within $1 billion of Honda.

That’s only market value, though. And market value is essentially just how much their stock shares are worth. As we said, GM is still making almost 10 million more vehicles every year than Tesla. That’s way more important for your shop than Tesla’s meager output. Right?

For now, yes. But there are obviously a lot of people betting that Tesla’s future is brighter than the future of many American auto manufacturers. That shouldn’t be ignored. In fact, more than 400,000 people have made cash deposits in order to reserve the new Tesla Model 3, which is expected to begin rolling off the line soon. Those 400,000 Model 3s are four times the number of vehicles they delivered a year ago. And that’s worth your serious consideration—because many of those cars will eventually need repairs. 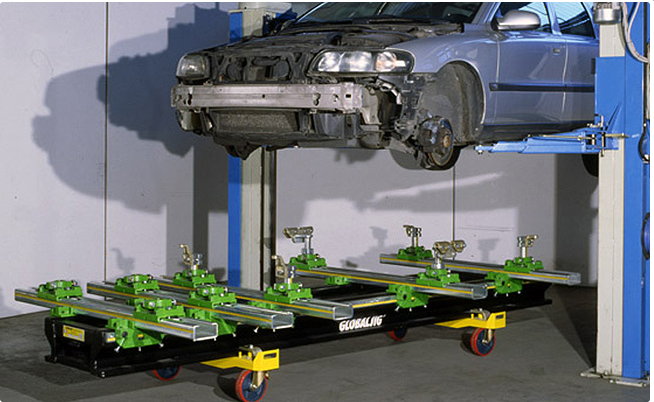 No one understands this more than Tesla itself. In fact, the company plans to add 300 approved body shops in the second quarter of 2017, and will undoubtedly add more as the months and years go by. That’s an opportunity for you—if you meet their standards.

One of those standards involves manufacturer-approved equipment. As you might suspect, we offer some of those options in our line of collision benches. They’re not just Tesla-approved. They’re also approved by numerous other auto manufacturers, including Land Rover, Jaguar and Aston Martin.

The Mobile Bench is a great fit for shops as it reduces load times by up to 75%, which allows shops to dramatically increase their overall productivity. And because it’s mobile, you can move the repair job to the most qualified tech, instead of having that tech need to go to the vehicle. In other words, the Globaljig present by Chief Mobile System bench is just the thing to electrify your revenue—whether the cars rolling into your shop are electrified or not.